The Fedner family : a story of resilience, persistence and joy

Growing up as the child of Soviet immigrants and the granddaughter of Holocaust survivors has colored every aspect of who I am. The fact that you’re here, reading this page on my website dedicated to my career in the food industry is completely and entirely due to the fact that my parents decided to flee the Soviet Union 30 years ago. I owe them everything and I’ll never forget that. This is our story.

My maternal grandparents, Lola and Yefim Fishman, were born in Romania (modern day Moldova) in 1930 and 1927 respectively. I don’t know much about their childhoods but I do know they were cut far too short; in 1941, the Holocaust began. 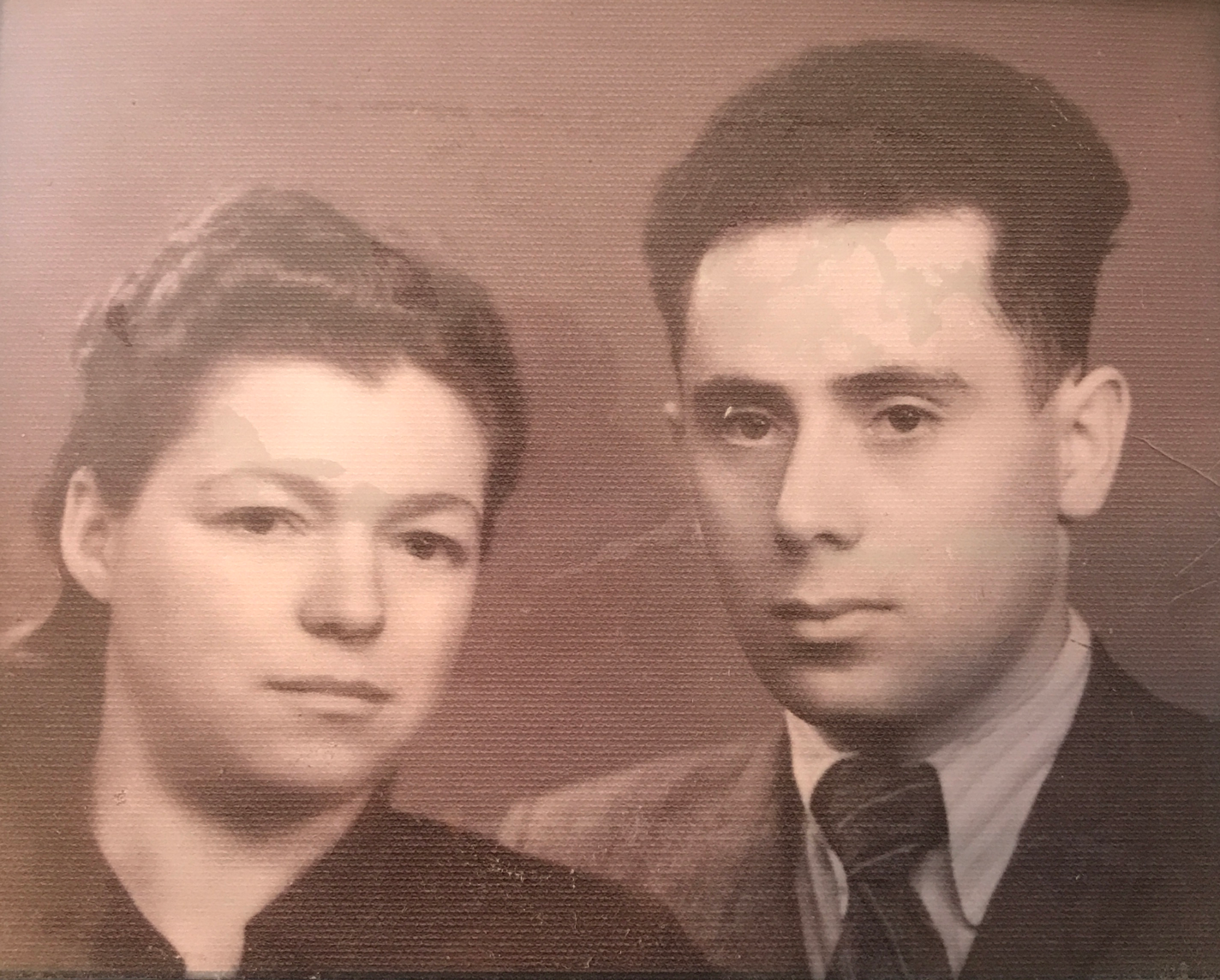 My grandfather, who’d been adopted by his aunt & uncle shortly before the war, and therefore lived in a different town than his immediate family, became a resident of the Bershad ghetto. Shortly thereafter he learned that both his parents and his four brothers and sisters had been killed upon the arrival of the nazis. Meanwhile, my grandmother spent four years in the Chichelnik ghetto. My grandparents rarely spoke about their experience in the Holocaust but the stain it left never went away. After the war, they both settled in Chernivtsi, Ukraine, where they met and got married. 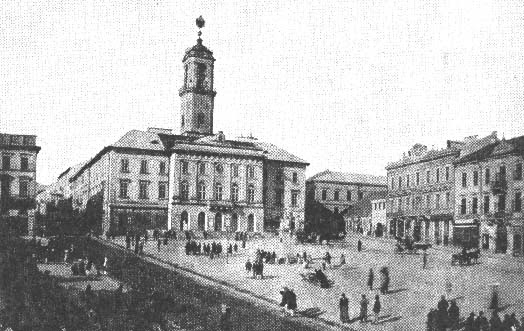 Both my parents, Alla & Greg, grew up in Chernivtsi. I grew up hearing stories about my parents’ childhood: the good and the bad. It was the Soviet Union, after all, and even though my parents painted a picture of a rosy, carefree childhood with winters spent riding sleighs in the picturesque snow and summers spent on the Black Sea in Odessa, there was no escaping that fact. My mom graduated from high school with a gold medal: the highest academic honor that was rarely, if ever, granted to Jewish students, which helped her get into college in Moscow, where my father was also attending school. Even though they grew up in the same town, the first time they met was on the train back to Moscow after winter break in Chernivtsi. They realized that Greg’s twin sister, Zina, had married Alla’s next door neighbor - a small world, indeed! They stayed in touch and eventually began dating. 2 weeks later, Greg proposed. 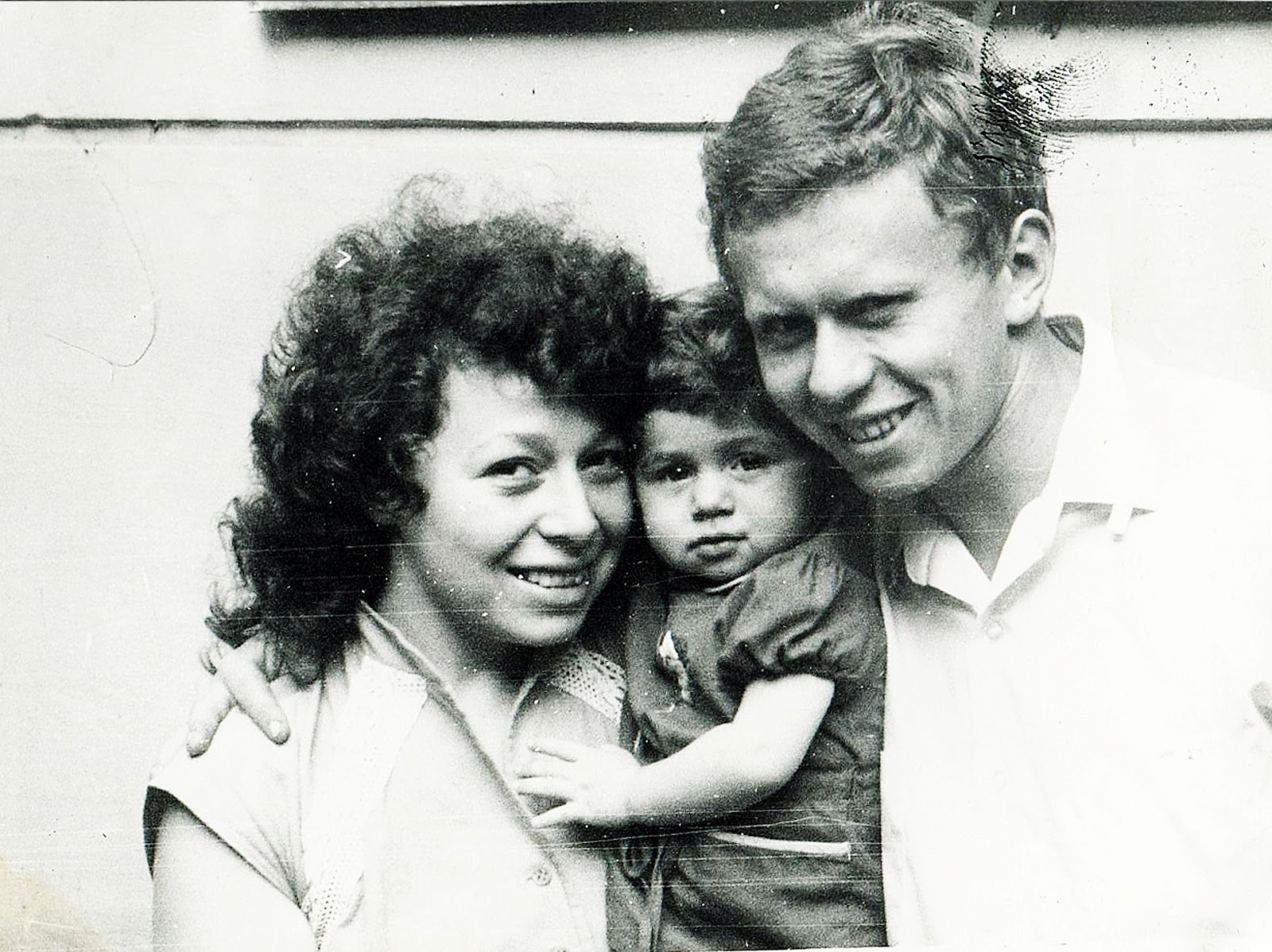 In 1988, my parents, Alla and Greg, fled the Soviet Union with nothing in tow other than their 5-year-old daughter, my sister, Natalia and $270 ($90/person). They faced a long and challenging immigration process, spending months in Vienna, Austria and Ladispoli, Italy before being accepted into the United States. During this time, they lived off of money made from selling Russian tchotchkes like nesting dolls in outdoor markets. 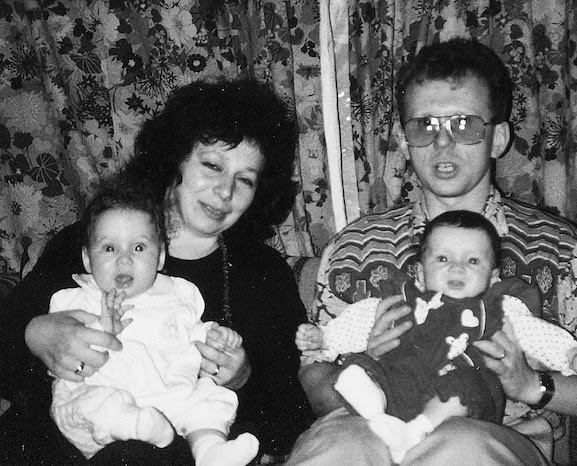 The land of opportunity

My parents fought tirelessly to bring the rest of our family over to the land of opportunity along with them and in 1991, their efforts paid off: their parents were able to join them in Ohio. It was a good thing, too, because a few short months later, my twin sister and I were born - I hear we were quite the handful :) 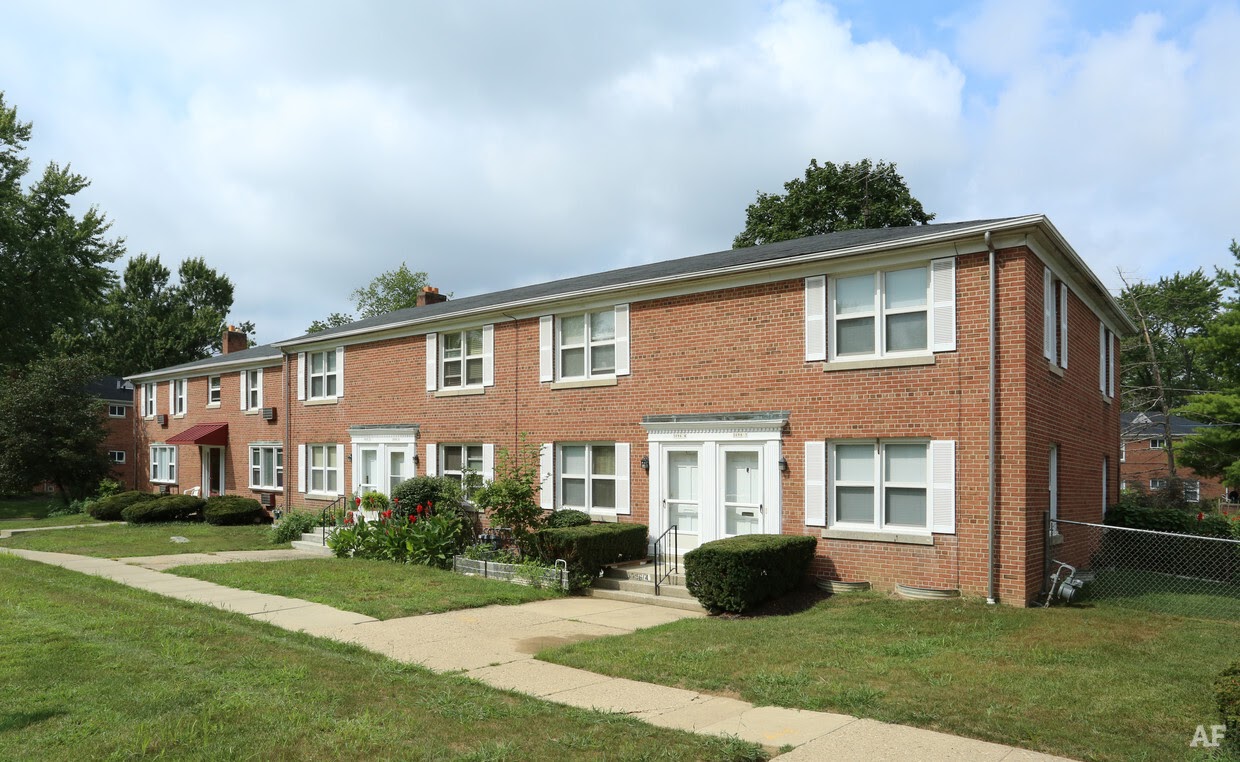 While my parents worked overtime to support us and rebuild their lives in America, my twin sister and I were fortunate enough to be raised by our grandparents: Babushka Lola and Dedushka Fima (my mom’s parents) and Babushka Lida (my dad’s mom). Being raised by my grandparents, who never spoke English, had an intense and lasting effect on my life. It was clear early on that my maternal grandmother, Babushka Lola, and I had an uncanny physical resemblance. We went on to form an inseparable bond.

My twin sister and I grew up playing in the front yard of their low-income apartment in the Bexley Plaza Apartments, a complex filled with many Russian babushkas and small children whose parents were busy starting over in America. We didn’t have everything, but we had each other. And some of my fondest childhood memories revolve around summers at the Bexley Plaza: it's where I learned to swim, read Russian, make tvorog. It’s where I ate salads from the cucumbers and tomatoes growing in my grandpa’s magical garden, dipping fresh bread into the delicious olive oil + tomato juice leftover at the bottom of the bowl. It’s where I learned to love food and where I became the person I am today. 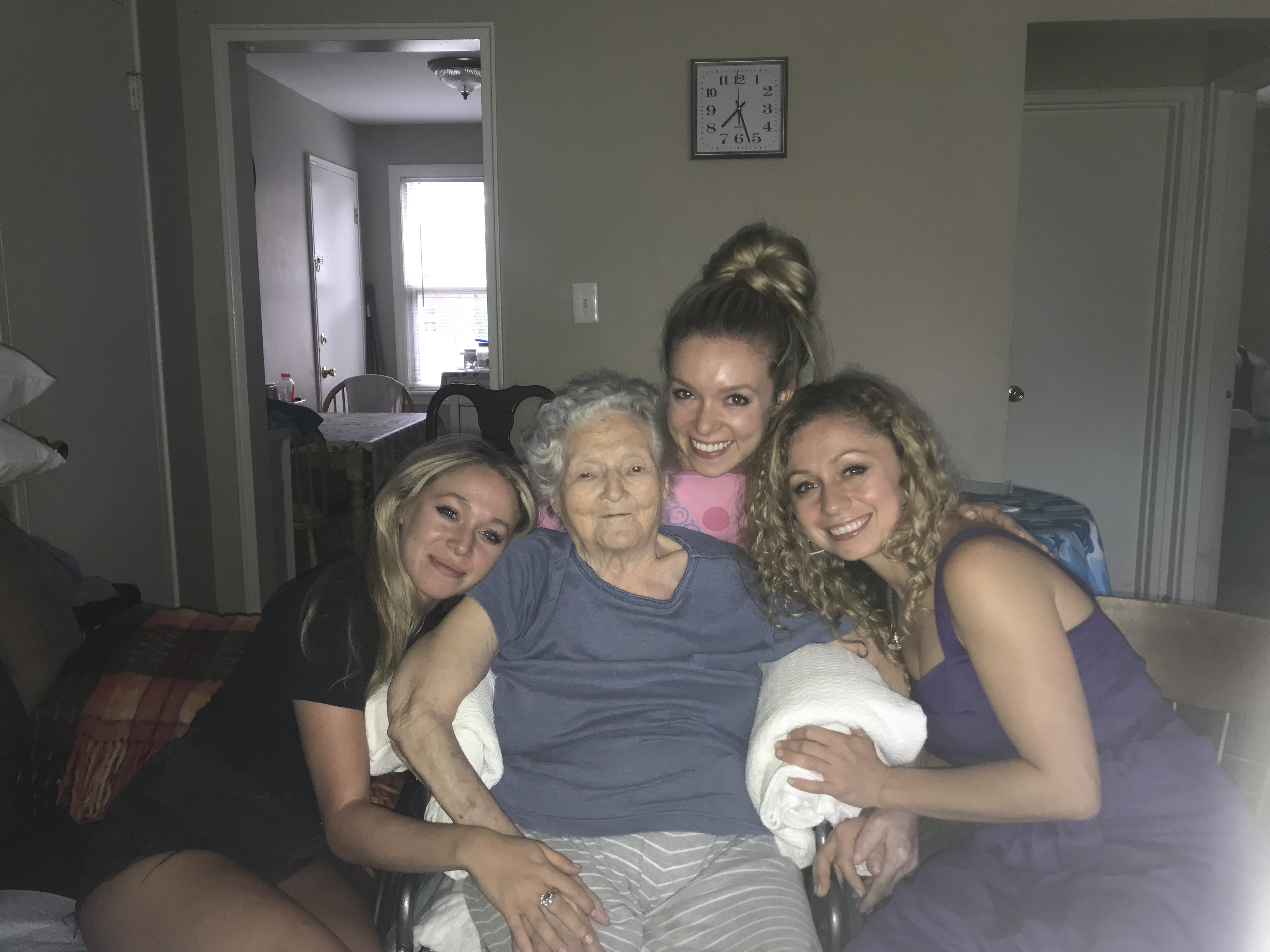 My sisters and I owe everything to the generations before us. The Fedner sisters are strong, resilient, and boy, oh boy, do we work hard. I remember growing up envious of my classmates whose families had money and connections: they had nice houses, nannies, the coolest Abercrombie clothes. They didn’t have to worry the same way we did about money or about the future. But from today’s vantage point I can confidently say that the blood that runs through our veins, the strength and resilience in our DNA, the work ethic that’s been instilled in us since childhood has carried us further than money and connections ever could. Forever and always proud to be a Fedner.

Growing up as the child of Soviet immigrants and the granddaughter of Holocaust survivors has colored every aspect of who I am. The fact that you’re here, reading this page on my website dedicated to my career in the food industry is completely and entirely due to the fact that my parents decided to flee the Soviet Union 30 years ago. I owe them everything and I’ll never forget that. This is our story. 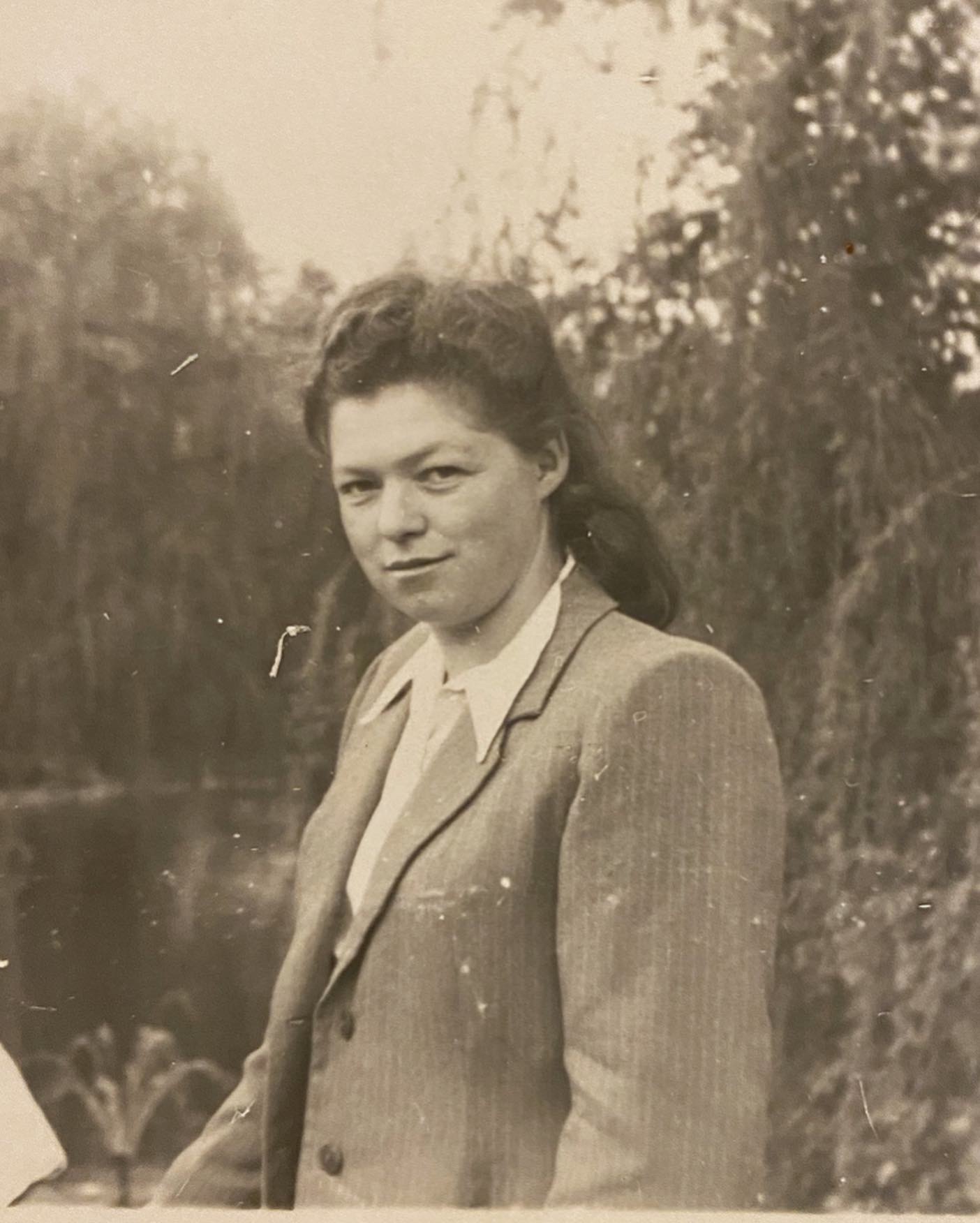 This is my Babushka Lola. Don’t we look so much alike? I don’t know if soulmates exist but if they do, she is mine. Baba Lola's life wasn’t easy: she was just 11 years old when the Holocaust began and she dealt with the repercussions of antisemitism her entire life. Despite it all, she remained the strongest, most resilient person I’ve ever known. Whenever I’m having a tough time, I remind myself that her blood flows through my veins so I can make it through anything. 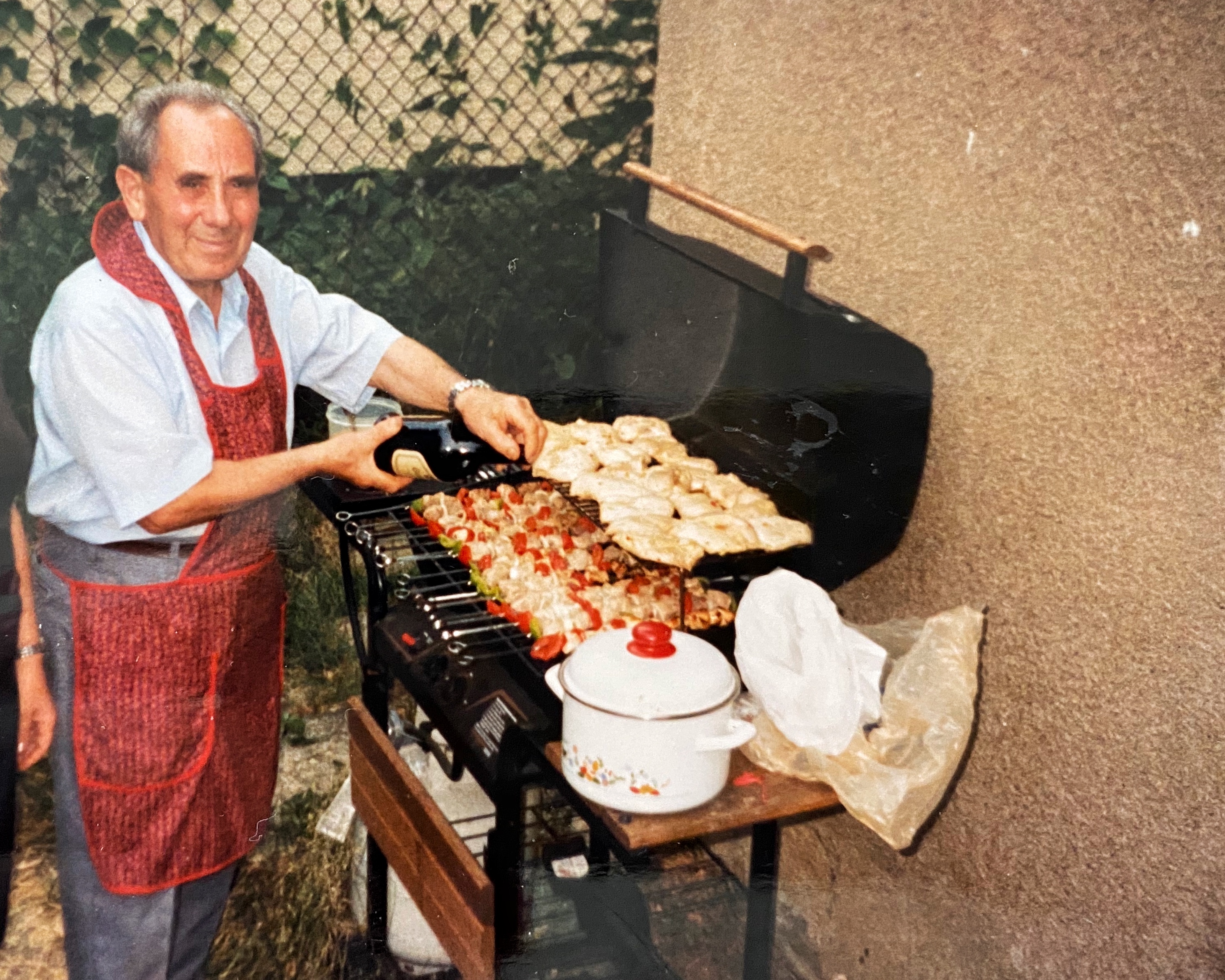 Seeing my Dedushka cooking shashlik over a charcoal grill brings a smile to my face. He made his own bread, wine, cheese, smoked meats. His hands always smelled like garlic from all the pickling he did. And he was kind - the kind of kind that makes your heart almost hurt because he felt too good for this world. For a man who lost so much - including his four siblings and parents in the Holocaust - he never let it ruin him. He was a true mensch. 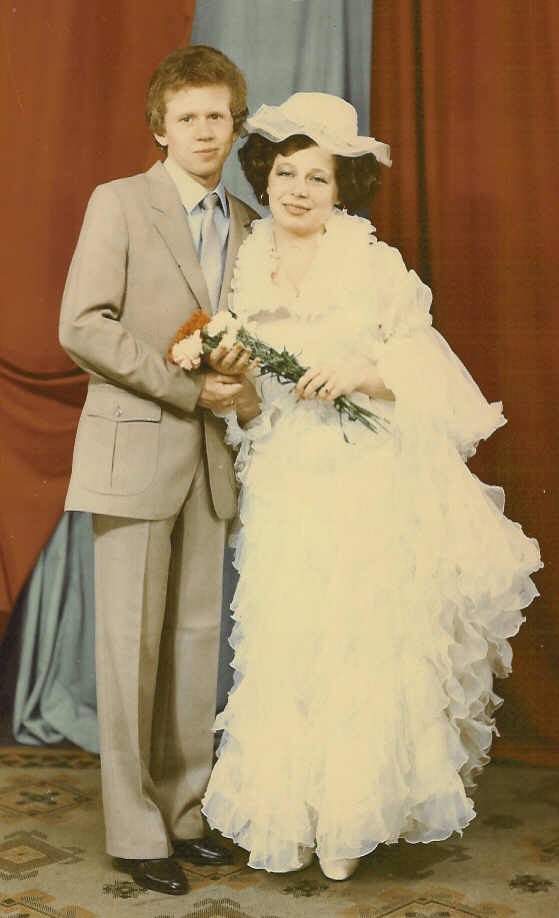 I literally cannot believe that my parents were 21 in this photo from their wedding. 21! They were children! What’s even more insane is that they got engaged two weeks after they started dating and married just six months after that. My mom looks so beautiful - and my dad looks EXACTLY like my twin sister! I wish we still had her wedding dress but unfortunately, a wedding dress doesn’t rank high on the priority list for items you need when you flee the Soviet Union. 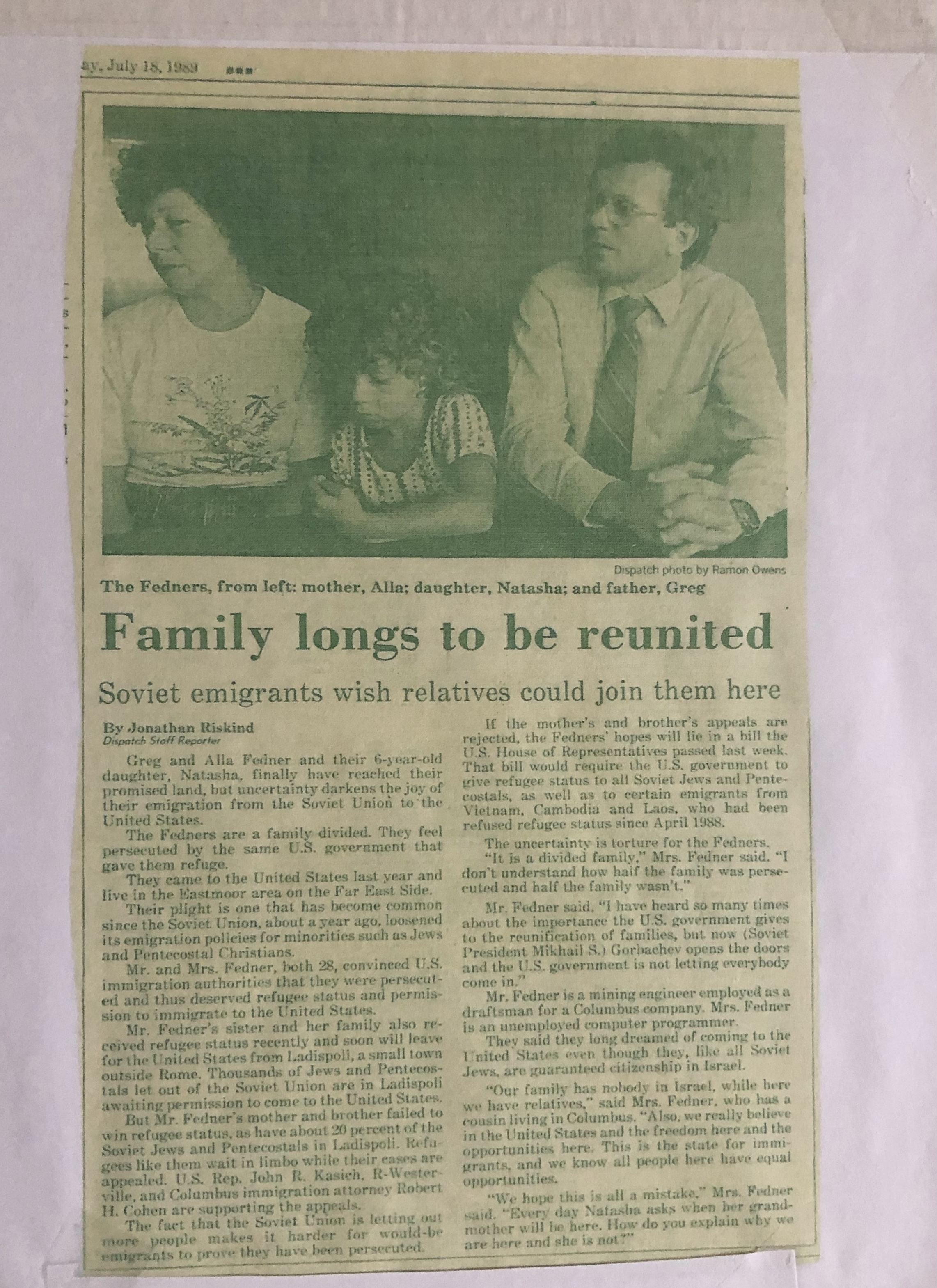 This newspaper clipping is from 1989 and details the struggle my parents faced in getting the rest of their family over to America from the Soviet Union. I think about it often: how worried and sad my mom looks, how defeated my dad looks. They were only 28 in this photo which is my age as I write this. It’s hard to imagine just how difficult their situation was but if there’s one trait all the Fedners share, it’s resilience. 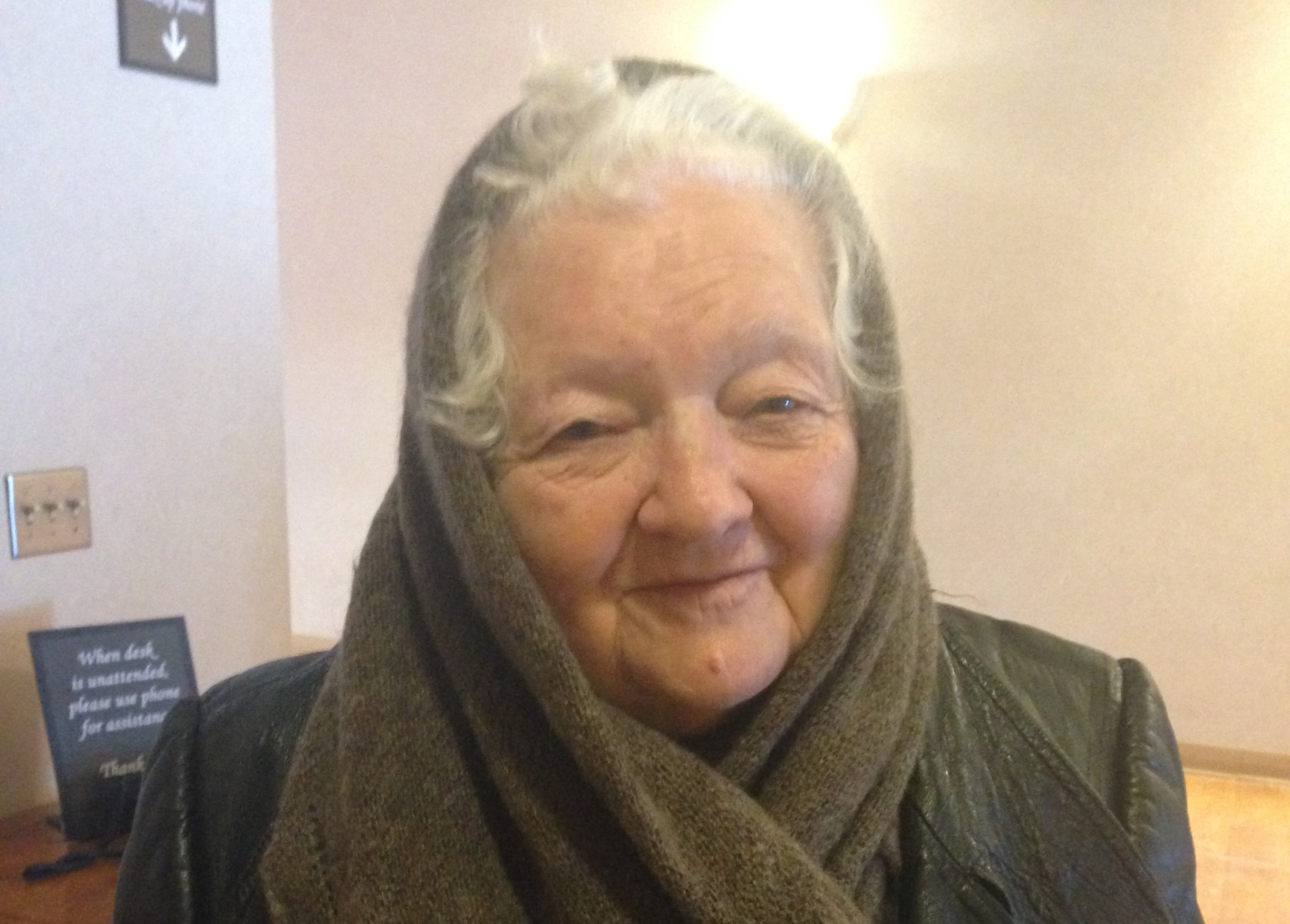 This is my favorite photo of my Babushka Lola - it’s exactly how I picture her in my head and it’s been the screensaver on my phone ever since she passed away in January 2020. I have that wool scarf in my drawer. I keep it tucked away and only bring it out when I’m really in need of comfort because I want it to keep smelling like her for as long as possible. I miss her so much. 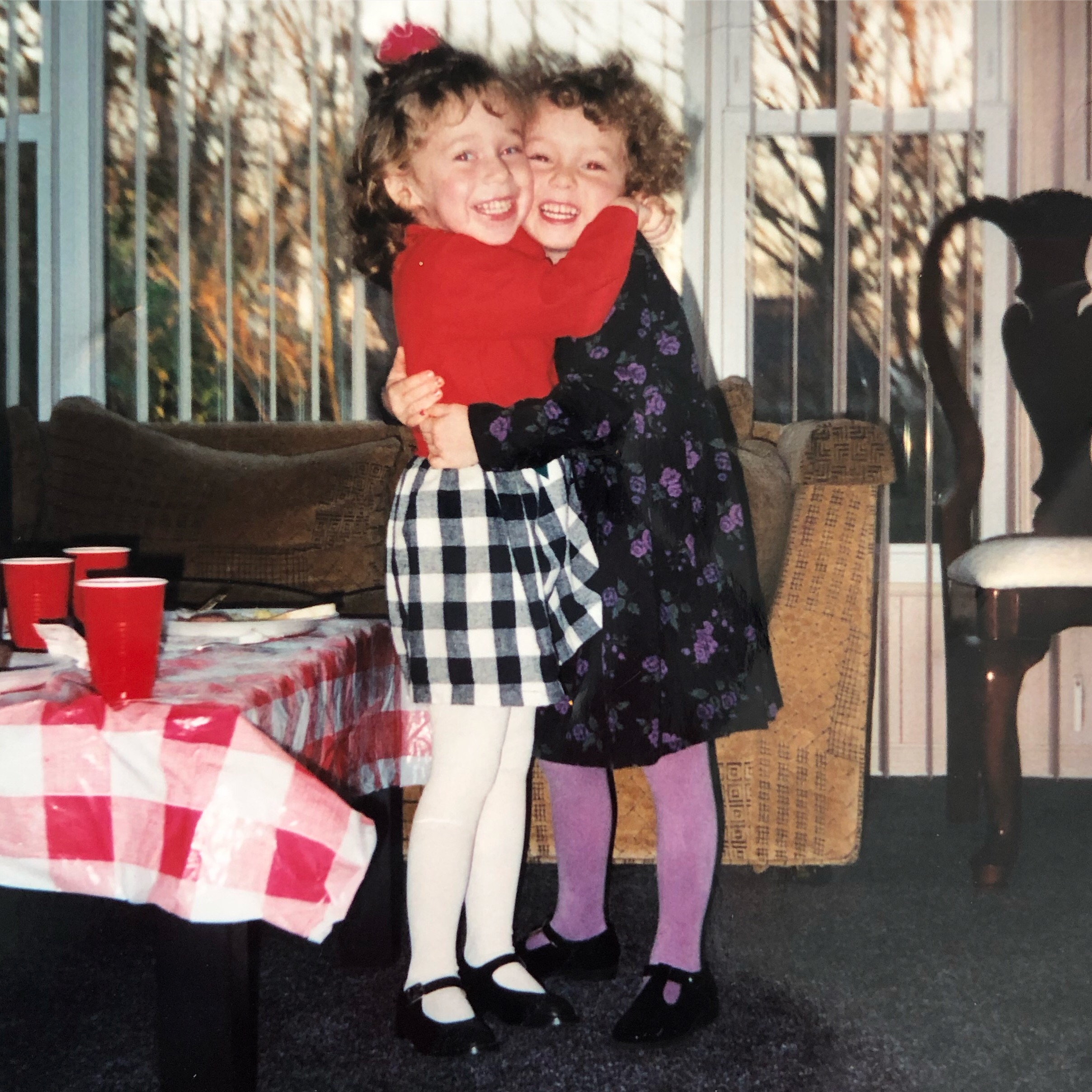 Twinning with Frannie! Frannie and I were inseparable when we were little, and our favorite pastime was committing “pakasti”-  aka little mischievous deeds. I laugh so hard when I think about those pakasti: one of our favorite games was hiding underneath the dinner table and then, when the adults sat down to eat, we'd start stomping on their shoes. We committed some more serious transgressions like trying to run away from home when we were six with nothing in tow but our dolls and maybe two dollars but that’s a story for another time.

I’m sorry but does my dad not look exactly like Napoleon Dynamite in this photo? Those glasses are everything. I genuinely can’t tell you much about this photo because I was barely conscious at its inception but I would love to take a moment to appreciate my mom’s 90s hair in full swing. 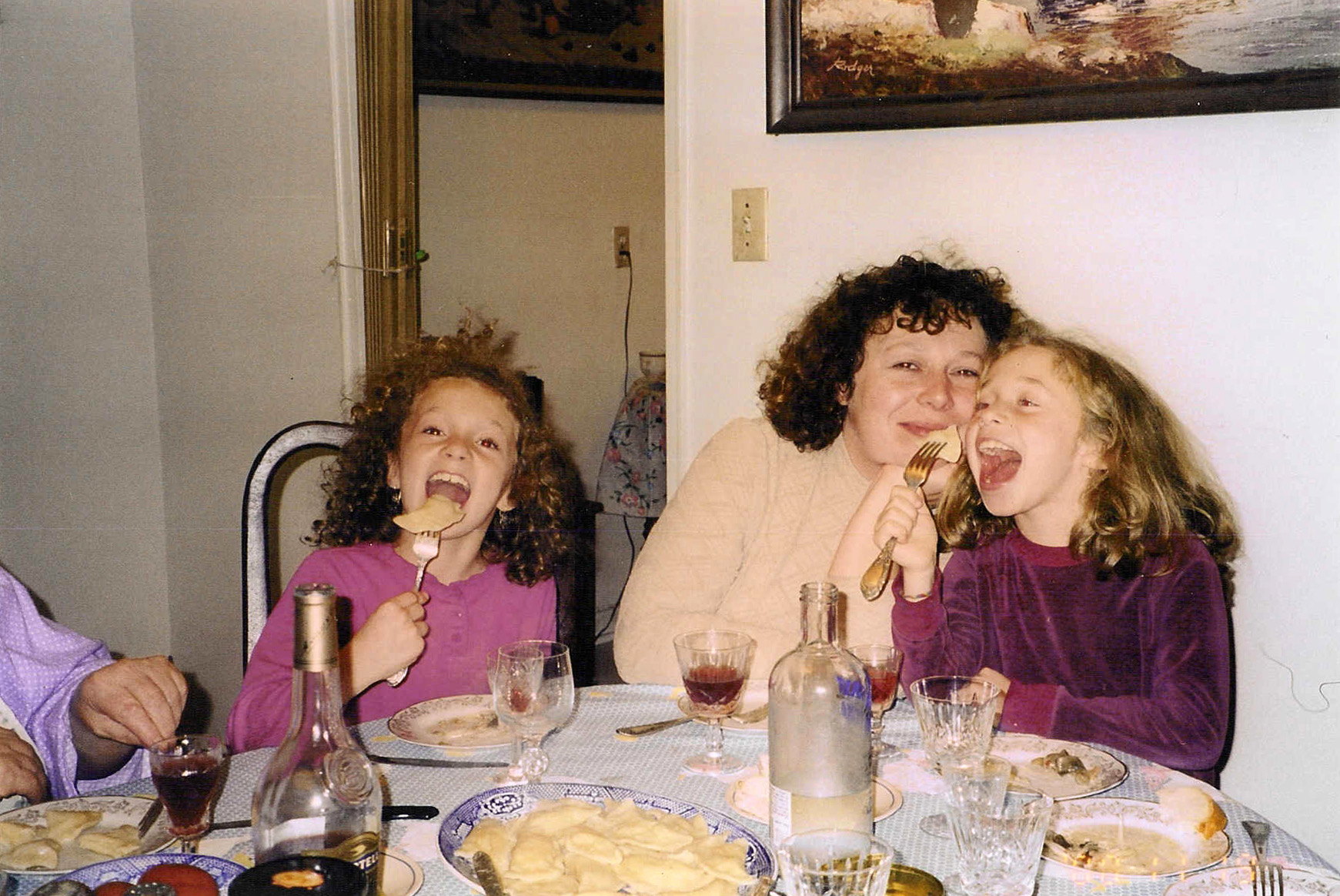 This is one of my favorite photos of all time! I am sitting at my Babushka Lola’s table eating her famous vareniki (potato & onion dumplings) with my mom and twin sister (check out the bottle of Absolut in the corner - so on brand LOL). Sitting at my Babushka’s table with family will forever be my happiest place.

Thank you! Your submission has been received!
Oops! Something went wrong while submitting the form.